Due to the efforts of a pioneering local birder, Soweto has become known as a fascinating area to go birding. Key areas for birding center around the iconic painted towers of Orlando Power station, and includes excellent wetland and Highveld koppie birding.

The Enoch Sontonga hill is situated close by – adjacent to the University of Johannesburg Campus and is named after the composer of Nkosi Sikelel’ iAfrika. A walk on the hill can produce surprising birds including Diederik Cuckoo, Cape Sparrow, Black-chested Prinia, Red-throated Wryneck, Bokmakierie, Brown-backed Honeybird and Crested Barbet.

Other good sites in Soweto include Thokoza Park and Moroka Dam. Orlando Dam is reached from just north of the Bara Mall on Chris Hani Rd. 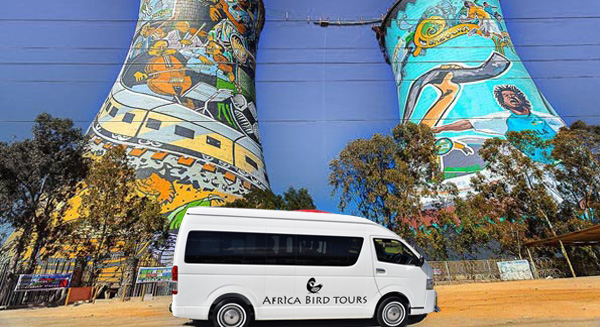 This itinerary is especially well suited to any time of year. Soweto is especially ideal during South Africa’s winter months (May – September). These months are among the coolest, and additional layers are strongly recommended for early mornings and evenings. Cooler temperatures also make for pleasant conditions, though the winter months do experience more rain.